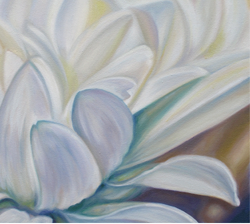 Sunchannel is the musical project of artist Michele Wortman.

Michele’s interest in electronic music dates back to the 80’s where she became enchanted with the new wave of synthesizer based music.

In the mid 90’s she began putting her photography to music and doing small scale performances featuring projections of her macro-based artwork to musical projects such as the Orb and Future Sound of London. Realizing how instrumental the music was in creating the mood and context for the imagery, Michele intrigued with the idea of writing her own musical compositions to accompany the artwork.

In 2000 she bought some gear and began to explore sound. As the sketches became more realized she pondered what to call her musical project. Untrained and without much guidance, Michele thought about what her music seemed to invoke. She decided to call the project Sunchannel, as the intuitive way in which she worked was like tapping into a subconscious collective, channeling energy.

In 2005 Michele wrote her first experimental CD to accompany Moments of Epiphany, a coffee table art book featuring her macro abstract photography. Still early in the stages of personal style, she then released Tune In during 2006, followed by Prism in 2008 and Current in 2010.

Below are videos from Current, produced by Michele's partner Guy Aitchison. You can hear more Sunchannel at the Proton Press website, or see what CDs or DVDs are available at the MicheleWortman.com online store.

An interview with Michele Wortman
By Guy Aitchison, March 2010

G) Growing up, what music did you find yourself attracted to the most, and what made it stand out to you?

M) I just loved music. Disco, rock, pop, soul, new wave, goth, grunge, progressive trance, anything that moved me. I went through a lot of phases with my identity, and what music I was listening to at the time directly reflected that.

G) At what point in your life did you realize you wanted to write music?

M) Well, I always wanted to be involved with music somehow. I tried learning piano when I was a kid. Couldn’t sing, so being in a band was out, considering I did not know how to play an instrument. I orbited around the notion of wanting to try writing electronic music for a bit. I started asking questions about what gear to get and feeling out getting started in yet another artistic pursuit. Then in 2000 I bought a Korg Triton, and so began the journey.

G) Is there a particular goal or vision that you are trying to express through your songs?

M) I think of the songs that I am writing much in the same way I think of all artwork I do. It is an extension of my character and how I am feeling at the time. My goal is to keep on evolving in hopes to better express myself.

I hope that others will find it worth listening to and get something back from it in the same way they enjoy my visual artwork.

G) You’ve said often that you want to write music that you are interested in listening to… what are the characteristics of Sunchannel that are meant to satisfy your own musical tastes?

M) I listen to all kinds of electronic music. I don’t have a favorite genre. I think all styles within electronic music have their merit and I enjoy the range. I suppose if I were to reflect on how that broad spectrum of interest might pertain to Sunchannel, I would say that I am the sum total of all of my experiences. Everything that I absorb has some sort of impact on me. I like working with an open sound palette and not getting too caught up in classifications of a specific style… just letting the music flow.

A measure of success for me is if I am listening to one of my songs and I think.. wow, if I heard this on Pandora I would bookmark it.

G) You’ve released several CDs prior to this, including a soundtrack for your book of abstract realist photography, Moments Of Epiphany. Through the course of your musical career, what are the biggest changes that have happened with your music, and what is the overall direction of your musical evolution?

M) Well, the first two CDs were very unstructured and somewhat unguided. I did not have the understanding that I have now on many levels. It was helpful to spend some time talking with Satchi Om about music. He pointed me in a new direction with suggesting switching to Logic as well. That led to renewed inspiration and as a result, I wrote my 4th CD this past winter.

G) What are your plans for Sunchannel in the near future, including performances, new releases, videos and other projects?

M) I originally started writing music to accompany live performances I was doing featuring trippy projections of my macro photography. I have not done too much with bringing the two together yet. I would like to work on blending my sound with my visual work and see what comes of it.